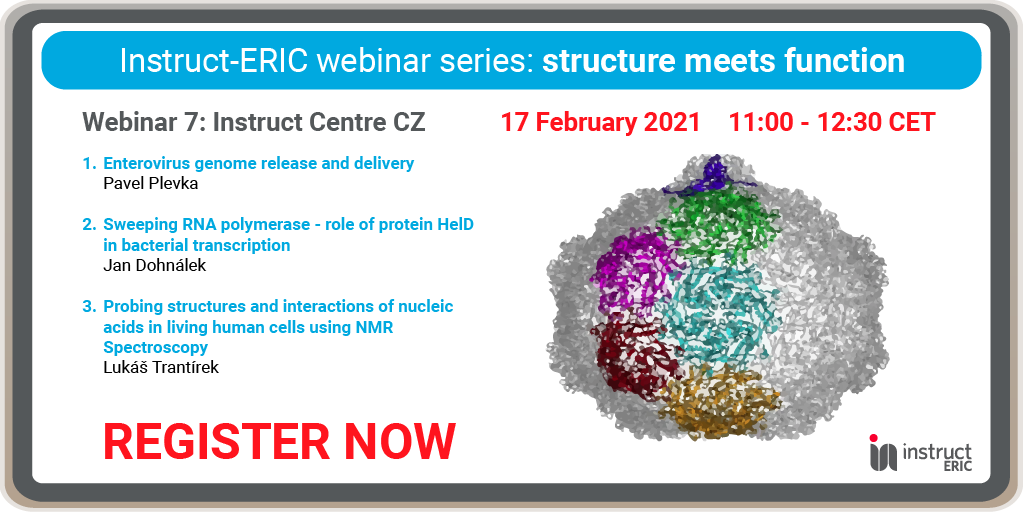 Featuring expert speakers from Instruct Centres across Europe, Instruct-ERIC Webinar Series: Structure Meets Function highlights some of the latest developments in structural biology, demonstrating how integrative methods are enabling scientists to decipher the mechanisms that underpin health and disease.

Watch the previous webinars in the series here.

Abstract:  Enteroviruses cause human diseases ranging from the common cold to poliomyelitis. To initiate infection, enteroviruses enter cells by receptor-mediated endocytosis. However, the mechanism by which enteroviruses deliver their RNA genomes from endosomes into the cell cytoplasm remains unknown. We used in situ cryo-electron microscopy to show that membranes of vesicles containing rhinovirus 2 deform in a characteristic manner we named warping. Subsequently, the warping becomes so extensive that the virus-containing vesicles disintegrate and release virions into the cytoplasm. Less extensive warping of vesicle membranes was also observed in non-infected cells, demonstrating that rhinovirus 2 overactivates a cellular membrane remodeling mechanism to induce endosome disruption. Particles of rhinovirus 2 release their genomes into the cytoplasm, where empty capsids accumulate. We used cryo-electron microscopy to visualize virions of human echovirus 18 in the process of genome release. We discover that the exit of the RNA from the particle of echovirus 18 results in a loss of one, two, or three adjacent capsid protein pentamers. The opening in the capsid, which is more than 120 Å in diameter, enables the release of the genome without the need to unwind its putative double-stranded RNA segments.

Affiliation: Institute of Biotechnology Academy of Sciences of the Czech Republic (BIOCEV)

Abstract:  RNA synthesis is central to life, and RNA polymerase (RNAP) depends on accessory factors for recovery from stalled states and adaptation to environmental changes. Here, we report a cryo-EM structure of a complex between the Mycobacterium smegmatis RNAP and HelD. The crescent-shaped HelD simultaneously penetrates deep into two RNAP channels that are responsible for nucleic acids binding and substrate delivery to the active site, thereby locking RNAP in an inactive state. Three independent teams of researchers from Australia, the Czech Republic, and Germany have described the structure of a striking new complex between bacterial RNA polymerase and an accessory protein, HelD. The results were recently published in a series of three parallel papers in Nature Communications.

Abstract:  Conventional biophysical and chemical biology approaches for characterization of structure and interactions of nucleic acids (NAs) abstract NAs from their native environmental context. However, cumulative experimental observations have revealed that essentially all aspects of NA stereo-chemistry including the NA structure, dynamics and interactions strongly depends and are modulated by physical-chemical environmental factors. I will present and discuss most recent developments in the field of in-cell NMR spectroscopy, a recently introduced concept allowing exploration of DNA/RNA structure and interactions under physiological
conditions in cellulo.